The Hansell brothers—T.J., Luke and Kinzie.

The Hansell brothers were raised on a farm where learning was hands-on and higher education was important. All three graduated from Washington State University, like their father and grandfather, before returning to run the family’s farms–Kenzie to Athena, and TJ and Luke to Hermiston.

The farm in Athena consists of about 2500 acres of owned and leased land used primarily for alfalfa and wheat, and occasionally field corn and barley. The fields are irrigated with wastewater from the nearby Smith Frozen Foods plant. The rest of the land is a combination of mountain property, rangeland and Conservation Reserve Program (CRP) land.

The Hermiston farm is about the same size, and since it can grow almost anything, the Hansells grow a variety of crops including field corn, grass seed, alfalfa, lima beans, and carrots. They also lease some of their land to farmers who grow watermelon, onions and potatoes.

The boys’ father, Tyler S. Hansell, was instrumental in the inception of Farmers Ending Hunger. “Fred Ziari [President of Farmers Ending Hunger] approached Dad with the idea and they kicked it around for awhile. Both men came to the realization that it was ridiculous that a state that produces as much food as we do could have so many hungry people,” says TJ. “This is a great connection between the city and the rural. It connects people on both sides; this is one issue we can both work on together.” 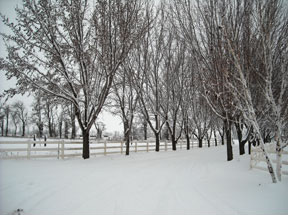 Entrance to Hansell Farms in Athena.

Hansell Farms contributed to Farmers Ending Hunger that first year and has been involved ever since, donating beef, wheat for pancake mix, and cash. After their dad passed way, the brothers stayed involved with Farmers Ending Hunger: “It didn’t just mean something to him, it means something to us as young farmers – being involved and being proud of what we do. We wouldn’t stop it. We’ll help when they need us, whatever they need.”