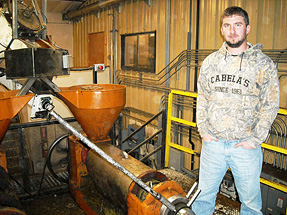 Jake Madison with the Canola crusher.

The Madison family is nearing the “Century Farm” milestone having farmed their land since 1914. But they’re not stuck in the past. They use forward-looking farming methods that conserve natural resources and have even patented an environmentally responsible valve for recharging aquifers.

Kent, who is a third generation Madison, operates the family farm with his sons Jake and Aaron. Most of the property is irrigated cropland where they raise potatoes, wheat, corn, canola and alfalfa, though they occasionally dabble in vegetables and popcorn. They lease land to local farmers growing peas, beans, rye grass, and bluegrass, and Beef Northwest grazes its cattle on the property’s non-farmable acres. 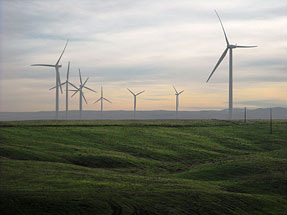 Madison Farms also houses 50% of the first farmer-owned wind turbines in Umatilla County and the first agricultural aquifer storage recovery (ASR) well in the world. Kent Madison’s ingenuity can be seen in many areas of the farm operation, from saving winter flood water for use in the summer to exploring methods for making their canola food grade and/or recyclable as biodiesel.

The left side of the field has been spread with bio-solids while the right side has not.

A shared progressive outlook and long-standing friendship with Fred Ziari, Farmers Ending Hunger President, connected Kent with Farmers Ending Hunger. Madison Farms has donated actively from the beginning, with bulk volumes of wheat and monetary contributions. “Everybody is feeling like there is a need to feed the hungry, but there is also a need for everyone to contribute in whatever way they are able. If you can’t donate crops or money, you can still get involved in other ways, like helping repackage the food into smaller amounts that are manageable and distributable by the food banks.”