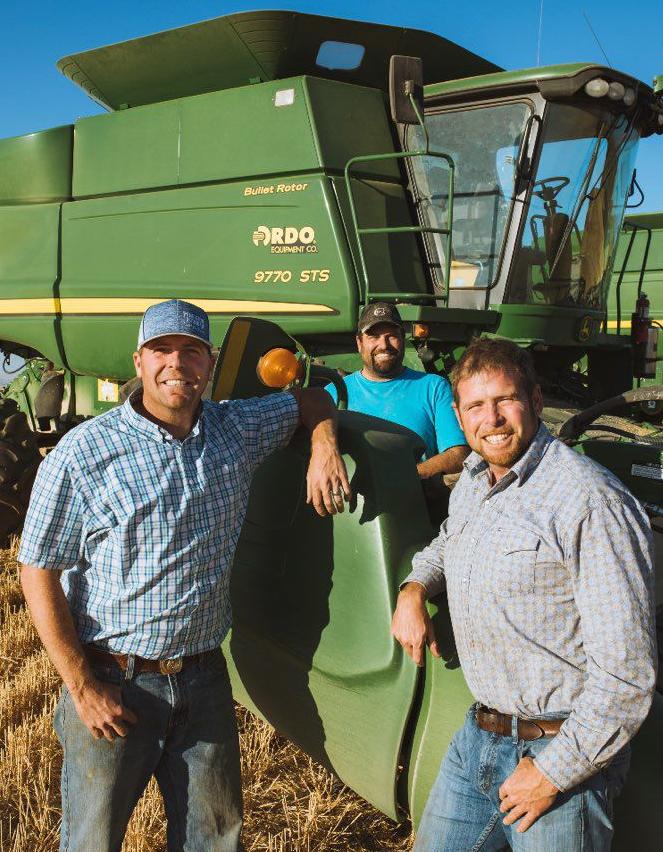 From left to right: Kenzie, Luke, and T.J. Hansell are among the over 100 farmers across the state doubling their efforts to supply Farmers Ending Hunger with enough produce to aid families affected by the COVID-19 outbreak.

ATHENA — Kenzie Hansell has been farming wheat for Farmers Ending Hunger since the nonprofit’s inception in 2004, but this year he’ll be doubling his efforts.

The organization, which takes produce donations from farmers around the state and ships them to food banks, set a goal earlier this month to double their output in order to supply the Oregon Food Bank and smaller organizations to provide area families who are in the midst of financial strain in the wake of the COVID-19 outbreak with enough food to make it through the crisis.

According to a recent press release, an average of 84,000 children in Oregon rely on meals from emergency food boxes.

“Our board of directors decided that, in this time of need, we donate our efforts,” Farmers Ending Hunger Founder and President Fred Ziari said. “We asked our growers to give more, which has never been an issue in the past.”

Although wheat and alfalfa are their primary produce, Hansell Farms also grow grass seed, lima beans, and carrots. They also lease a portion of their land to watermelon, onion, and potato farmers.

“It’s a goal, and that’s the most important thing,” said Hansell, who runs farms in Athena and Hermiston with his brothers, T.J. and Luke. “It’s a situation where food insecurity is on a lot of people’s minds. If us farmers can come together, we will continue to be connected and work as a state to make sure some people’s insecurities can be met.”

Hansell’s farm in Athena is roughly 2,500 acres of owned and leased land that primarily grows wheat and alfalfa. The wheat that he donates is used for pancake mix at Pendleton’s Grain Craft and Continental Mills based out of Seattle.

“This is good product,” Hansell said. “Everyone needs to eat. Everyone is impacted by this in one way or another — producer or consumer.”

Hansell and his brothers spend their days, which could span anywhere from eight to 16 hours, planting, seeding, working the ground, and harvesting their product to ready it for donation. They are part of approximately 100 farms across the state working with Farmers Ending Hunger to aid in coronavirus relief.

The nonprofit delivers to food banks across the state, at minimum, once a month.

“This is a time where people are afraid,” Ziari said. “Food shelves are empty. People are losing their jobs. The stress of food insecurity is even greater (now). We as a farming community wanted to make sure our fellow Oregonians are not hungry.”

The nonprofit’s efforts will likely span all year long and into the next, according to Executive Director John Burt.

“It’s planting time right now, and they’re planting extra,” said Burt, a resident of Dallas. “It’ll grow as the year goes on. The response is positive from the growers. They understand the issue, and they want to help.”

Along with the portion of their harvest donated by participating farmers, additional help from food processors and public donations aid Farmers Against Hunger in their mission. Last year, Eastern Oregon farmers in Umatilla and Morrow counties donated more than 3 million pounds of produce. Their goal of doubling that number this year will help ailing food banks who are struggling to keep up with families in need.

“Food banks are scrambling right now from what’s been going on,” Burt said. “Lots of people are going to need food, and lots of people are afraid to go out. They’re going to run out of things. People are also going to be out of work. That unemployment check might not come soon enough. Farmers, we’re still going. Nothing has changed.”

While the day-to-day routine for participating farmers has remained relatively unchanged, Farmers Ending Hunger has faced its share of setbacks due to the COVID-19 outbreak. They were the target nonprofit for the Dancing With the Pendleton Stars event that was canceled due to concerns over the coronavirus spread, and their kickoff event earlier this month was also canceled, along with two fundraisers that were slated for April.

The organization accepts public help through their Adopt-an-Acre program. Supporters can donate at www.farmersendinghunger.com, or send contributions to P.O. Box 7361, Salem, OR 97303. Donations are used to cover costs associated with product sorting, canning, freezing, processing, packaging, and delivery.

The nonprofit has also partnered with the Pendleton Round-Up and the Happy Canyon to host a Farmers Ending Hunger Day on Wednesday, Sept. 16, and will feature interactive exhibits and donation opportunities for rodeo patrons to help in the fight against hunger in Oregon. Tickets start at $15 and can be purchased at www.pendletonroundup.com, or by calling 541-276-2553.

“Demand on the food banks never lets up,” Burt said. “We’re going to try and keep it going.”

PORTLAND, Ore. (March 20, 2020) – Eastern Oregon wheat, onion and potato farmers are doubling their efforts and donating even more fresh food during the current Coranavirus epidemic sweeping our state. “Last year we received over three million pounds of food from Umatilla and Morrow county farmers and today they announced they are committed to doubling that amount of food during this time of economic uncertainty,” says Fred Ziari, founder of Farmers Ending Hunger. Individuals can support the mission and donate funds to the Adopt an Acre program.

Farmers Ending Hunger offers a creative solution to eradicating hunger in Oregon by working directly with farmers who are growing and harvesting food as an intentional donation, and utilizing the Oregon Food Bank’s distribution network. The donated wheat is turned into pancake mix with the help of partners at Pendleton’s Grain Craft and Continental Mills in Washington State, and local ranchers are donating more cattle to be processed into hamburger meat for emergency food boxes.
“Oregon is one of the most productive growing regions in the country and also one of the hungriest,” says Ziari. “In an average month, 84,000 children in Oregon eat meals from emergency food boxes and with this health crisis, this number will grow daily. Our farmers recognize the immediate need and can pivot to make this additional donation happen.”
“Farmers have a tremendous opportunity to donate even more food during this crisis and do what they can do feed more of our community members experiencing food insecurity,” said Kenzie Hansell, FEH board member and farmer in Athena and Hermiston.
Partnering with Farmers Ending Hunger, the Pendleton Round-Up continues to work closely with local farmers to donate food to the local community. Farmers Ending Hunger Day at the 2020 Pendleton Round-Up will feature interactive exhibits and opportunities for visitors to help contribute to fighting hunger through donations and action. Tickets for the Wednesday, September 16 rodeo performance start at $15 and are available at http://www.pendletonroundup.com/ or call (541) 276- 2553.