Oak Lane Farms has been in the Wavra family for over 45 years. Current owner/operator Dave Wavra grew up helping on the farm and eventually took it over from his father, who established it with Dave’s mother. When they made the decision to farm full-time, Dave’s parents rented a piece of land from his grandfather and Oak Lane Farms was born.

Adding land to the operation whenever they could, the Wavras were eventually cultivating about 1800 acres of owned and leased land over 32 miles. Most of their diverse collection of crops supplies local processors Norpac Foods and Truitt Bros. The remaining ground is planted to grass seed and wheat, and the Wavras added filbert trees in 2010. 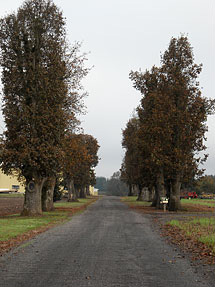 View down the driveway to the Oak Lane Farms shops

Dave first read about Farmers Ending Hunger in the Statesman Journal and thought it was great that farmers could donate an acre or two of food that a cannery would process. He said to himself, “Hell, donating a couple of acres ain’t going to hurt anything.”

Oak Lane Farms’ first donation to Farmers Ending Hunger was in 2009. Dave wanted to donate five acres of corn, but due to the limitations of the cannery he could give only two. (Farmers often have to throw out some of their crops; Dave threw out 150 tons of cauliflower in 2010.) In 2010, Dave gave another 2 acres of corn–the equivalent of about 20 tons–in 2010.   “We [farmers] can give plenty of food, I know that. And with your help, we can get it to the hungry.”